The art of protein synthesis

This incredible work of art shows a process that takes place in the cells of all living things: the production of proteins. This process is called protein synthesis and it actually consists of two processes: transcription and translation. In eukaryotic cells, transcription takes place in the nucleus. During transcription, DNA is used as a template to form a molecule of messenger RNA (mRNA). The mRNA molecule then leaves the nucleus and heads for a ribosome in the cytoplasm, where translation occurs. During translation, the genetic code on the mRNA is read and used to make a protein. These two processes are summarized in the central dogma of molecular biology: DNA → RNA → Protein.

Transcription is the first part of the central dogma of molecular biology: DNA → RNA. It is the transfer of genetic instructions in DNA to mRNA. During transcription, one strand of mRNA is complemented by one strand of DNA.

In eukaryotes, the new mRNA is not yet ready for translation. At this stage, it is called pre-mRNA and must go through more processing before it leaves the nucleus as mature mRNA. Processing may include splicing, editing, and polyadenylation. These processes modify mRNA in several ways. Such modifications allow a single gene to be used to produce more than one protein.

The translation is the second part of the central dogma of molecular biology: RNA → Protein. It is the process in which the genetic code in mRNA is read to make a protein. After the mRNA leaves the nucleus, it moves to a ribosome, which consists of rRNA and proteins. The ribosome reads the sequence of codons on the mRNA, and the tRNA molecules bring the amino acids to the ribosome in the correct sequence. 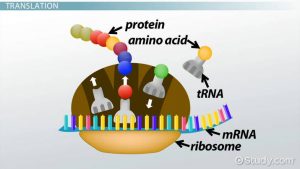